Iranilson did not have an easy relationship with his family “Because, of many fights and addictions, my parents separated when I was 10-years -old this saddened me a lot. Then, I was hoping they would get back together, but my mother met someone else and wanted to get married again.”

At the time, Iranilson rebelled: “A grudge was born inside me. I didn’t threaten my parents very well, or with indifference. I decided to live with my father and I took my two brothers with me and turned them against her.”

Iranilson’s father, unable to care for the children, se 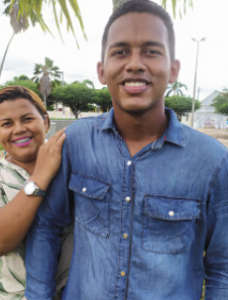 nt them to his aunt’s house. “I became very rebellious and dropped out of school. For four years, I went out every night and became drug-addicted to the point of consuming up to three packs of cigarettes a day. I drank a lot and was promiscuous.”

He says that behavior only made the situation worse: “It only brought me pain and sadness. I felt pain and did not even try to know what it was. I had a very deep depression and did not even want to leave the house anymore. It took two months until I remembered my mother.” So, Iranilson reconnected with her.

She continues by saying, “A little later, I asked if I could spend the holidays with her. She said yes, but on one condition. I go with her wherever she goes, even in a church. I agreed right away.”
Iranilson’s New Year’s Eve and his mother were at the Universal Church. There, the change took place. I started attending the services and left the hatred and addictions behind. I decided to give my life to the Lord Jesus.

Something great happened, I was baptized in water and received the Holy Spirit. Then, realized how much time I had wasted. A very important conversation happened with my mother and I asked her for forgiveness for everything. There was no more psychological or physical pain. We developed a strong union, a great friendship, the true maternal bond.”