Mércia tells that she helped drug trafficking even before turning 18 years old. “Life before knowing God was frustrating in every way. Most of my family was involved in trafficking and drug use and did witchcraft, like me. I even witnessed deaths. When I remember that I see how miserable in spirit and soul I was.” 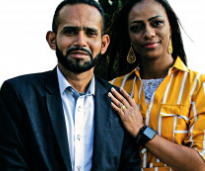 “I met a guy, William, and we moved in together. Once, my mother-in-law invited me to go to a meeting in the Universal Church. Half reluctantly, I accepted. When I set foot in the Church, I already felt its different environment. I was afraid, but at the same time, I was sure that God was there. It was a deliverance meeting.”

She claims that she was never the same after attending this meeting. “I returned in the following days and, on Sunday, I decided that my life would belong to the Lord Jesus. That day I promised Him that my process of deliverance began there. I left drugs completely and never left the Altar again. I wanted to know that God with authority and power to make demons bend their knees.”

Mercia took hold and grew in the spiritual life. She was on the right track, grateful for her progress, but frustration pricked at her heart. “The doors opened for me in every way, but I was in an incomplete home, as I was on my way to Salvation and my husband was not.”

She decided to put her faith into action. “My husband didn’t have an encounter with the Most High, even he betrayed me. After ten years of fighting for him, I got tired. I put it all in the balance and decided that if being with him threatened my bond with God, most important of all in my life, I would give up marriage.”

Mercia says that she prayed the following prayer: “my God, either the Lord kills my husband or kills me, because I do not accept to live the true and living Faith, to be serving You with such thirst and my husband to prevent it.” She asked for a separation and her husband finally “woke up”. One Sunday, he decided to go with her to the meeting.

“The Holy Spirit was working on him, he was converted and was baptized in water. I saw God’s will before mine and that frustration became the past.”