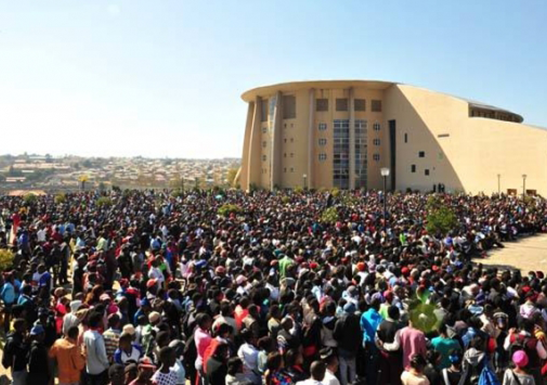 On June 16 of 1976, in the midst of the apartheid era in South Africa, about twenty thousand black students marched on the streets of Johannesburg’s suburbs towards the Orlando Stadium in Soweto to protest against racism, unfair educational treatment and especially against the fact that half of the subjects in black schools would be forcefully taught in Afrikaans, a language associated with the apartheid.

The June 16 Soweto Youth Uprising and the events that followed it left an aftermath of an estimated 600 young people dead and thousands injured due to the brutal counterattack by the apartheid regime. This student manifestation represents until today one of the greatest symbols of the fight against racism in the world. The painful aftermath of the Soweto Uprising marked the beginning of a new era in South African history.

Thirty-nine years later, on Youth Day in South Africa (June 16), more than forty thousand young people, in nine provinces simultaneously, remembered the period of apartheid from a different perspective during the Learn to Say “No” Event sponsored by the Youth Power Group (YPG). The struggle today is no longer against a racist political regime, but for carrying out the dreams of the new generation.

The event participants were entertained with popular hip hop beats and were inspired by different performances by members of the YPG, including a play about xenophobia (a leading problem affecting young South Africans) followed by the issues of drug addiction and suicide. Learning to say “no” to other prejudices was also the goal.

“Today I learned how to make the right decisions to change my life, learning to say ‘no’ to negativity, bullying, addictions, xenophobia and many other negative things,” said Talia (in photo).

A group of young people dressed in school uniforms danced to songs that marked the time, in honor of the protesters of 1976. Performers also staged parts of the movie Sarafina! The Sound of Freedom, a 1992 Warner Bros. film inspired by the Soweto Uprising, and they sang the famous song Our Father Who Are in Heaven. The presentations were a reminder that our tomorrow depends on what we decide today and on the opportunities we seek and fight for on a daily basis.

“The privileges you have today, the youths from 1976 did not have. You must use this strength and power to make the right decisions, because no one can choose for you,” said Bishop Colidiza Justice, responsible for The Universal Church in Soweto, during the opening of the event.

The YPG coordinator in the country, Pastor John Santos, said that those who do not want to have a defeated life must aim high. “You can become whatever you want, but for that you need to change your mind.”

The event also counted with the presence of Siviwe Mpengesi, president of the Chippa United football team, which alongside with the YPG has been discovering talents. Mpengensi motivated the youths to not give up on their dreams. His own life story is marked by achievements after perseverance in the faith he learned at The Universal Church.

At the end of the day, the youths prayed for their dreams and made a personal commitment to have determination and perseverance to change their lives.

“Learn to Say ‘No’ was beyond my expectations. I leave knowing that I have the strength to say ‘no’ to any kind of negative influence from my friends and people in my community,” said the young Nompumelelo.

“The youths of 1976 did their part, leaving for us today, 39 years later, an example to be followed; they wrote a new history. Do the same,” concluded Bishop Justice.

The YPG carries out several projects in many countries with the goal of promoting social inclusion and positive interactions among young people. It also engages in weekly activities that have in mind the well-being and success of each group participant.