Home » I Got Hooked…

Read the story of Kaio and Mayara

“I ended up turning away from God. I went out to clubs and smoked cigarettes until I was introduced to marijuana and started using it.”
Kaio says that smoking helped him to be accepted by a group of friends. “I wanted to be like them. I started drinking more and using cocaine until I got hooked, but it was an expensive addiction and I couldn’t afford it. So I started doing some favors for the drug trade: taking motorcycle and car orders in exchange for drugs until I started putting people who had initiated me to sell to me. 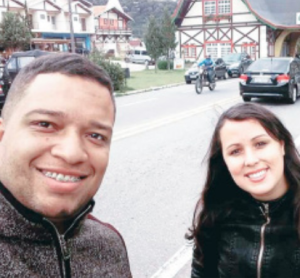 He also became involved in vehicle theft and continued to do drugs. “I came home feeling sick for having consumed a lot of drugs and eating poorly. Then, I even expelled blood from my nose and mouth at the same time. I tried to kill my father in fights we had and to confront my mother I took drug dealers into the house. She kept the Faith and continued to sacrifice for me in the Church. So I decided to go to the Universal Church after drinking so much.” Kaio met his wife.

“She also had a lot of problems in her family and, since the age of 12, she drank a lot. She came from a relationship where she was beaten up by her ex-boyfriend and all of this caught my attention, as I knew it was a spiritual problem. We started going to Universal together. She went by choice. I didn’t have to force her into anything. Five years later we got married.”

After a while, Kaio and Mayara broke free from their addictions and were baptized with the Holy Spirit. Today Mayara is pregnant. “I believe that whoever chooses to surrender to God must be persevering to have peace. The important thing is for the person to keep the Faith and not give up. The beginning will be very difficult, but you have to be willing to change and, above all, believe in God, not give up and avoid the thoughts that you are in sin. Those thoughts will come, but if you keep your focus on God, the miracle will happen,” observes Kaio.