Feeling of emptiness, guilt, and unwillingness to do even the simplest activities. This is how Stéfani describes some symptoms that accompanied her for a few years. She says that the good living conditions that her parents provided her were not enough to overcome the constant pain she felt. “I was going to college and soon got an internship. I had the support of my parents and friends, but the void was there.”

As the months passed, the suffering increased. She became more annoyed and disheartened. “I used to fight with my father and argue with the whole family, but whoever looked at me from the outside thought I was happy. I lived with friends, had money to go out and buy new clothes. On social media, I took beautiful pictures, but it was all just appearance.”

Stefani tried to forget the sadness at parties that lasted all night long. Her effort was in vain. The more she drowned out what she felt, the more the pain became unbearable. “I saw no way out of suffering.” She says she didn’t seek help for fear of being judged. Over time, the feeling of helplessness made her feel angry at herself. “I thought all the problems were my fault. This generated hatred towards myself.”

One day, suffering led Stefani to have a violent attitude against herself. “I thought I deserved to punish myself. 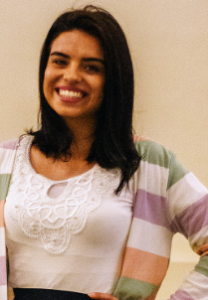 I started cutting myself to try to relieve that unbearable pain.” Self-harm became part of her routine.

“It was hard to control myself. I didn’t recognize myself anymore. I hid the cuts with bandages and coats.” One day, she spoke about the problem: “I told my mother because I was scared by what I was doing. She talked to me and started using her faith and fighting for me in church.”

Everything she liked. “I spent the entire night awake crying. I couldn’t work or study. Next, I ended up resigning from my job.” Shortly thereafter, she dropped out of college and stopped hanging out with friends and family.

She says that her brother invited her to participate in the meetings of the Youth Power Group (YPG) and one day she accepted the invitation. “I wanted to know what it was like to be happy again, so I asked God to show me a way out.”

Stefani started to participate in the Universal Church meetings and to follow the teachings. “I made proposals and participated in YPG activities. I was also baptized in water. Gradually, the suffering was disappearing. One day,

I was at home and I told God that I wanted to have a real encounter with the Holy Spirit to keep me in His presence and that happened. It was a wonderful day.” Since that day, she guarantees that her life has changed.

She says that faith helped her gather strength to face depression. The support of her brother and her parents was also essential. “Coexistence with my family has improved a lot and I’m
no longer afraid to talk about what I feel. The emptiness never came back and I know that God is with me in good times and also in deserts.”

“I was at home and I told God that I wanted to have a real encounter with the Holy Spirit to keep me in His presence and that happened. The emptiness never came back and I know that God is with me in good times and also in deserts.”