Home » “I Couldn’t See Beyond the Pain and Anger…”

“I Couldn’t See Beyond the Pain and Anger…”

Sally Learned How to Be a Better Woman for Herself, Her Child and Most Importantly She Became a Woman of God

“I kept thinking, ‘why me? What on Earth did I do to deserve this?” Whenever I arrived home, the yelling would start; the pain inflicted on me serving as a reminder of how worthless I was. I couldn’t see beyond the pain and anger. Every 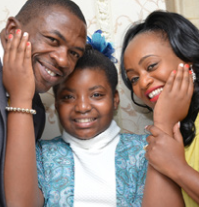 day it was the same routine.

I was so emotionally attached to my perpetrator that there was no way out for me. I was ugly and good for nothing, so to have someone by my side seemed like a dream.” Sally had accepted the lies she heard every day and with nowhere else to turn to, she decided that the only way was by going to clubs and getting drunk. As alcohol became her crutch, she also began to experience other issues, such as insomnia and various illnesses. “I had no vision for a brighter future. I focused only on the here and now.

Every night was getting worse and the thoughts to commit suicide were calling Sally. But amongst all these negative events, a miraculous event took place. While Sally walked down the street, someone simply smiled and handed her a Universal News newspaper from the Universal Church. When she read it at home, her eyes filled with tears. Right there in her room, she allowed all the walls she had built to come tumbling down. For the very first time, she sincerely asked God to help her.

I was in shock as I read the page through each page. it was as if someone was describing my life story. But the difference was the same. I ideally started attending the Universal Church.

“I eventually stopped going to the church, because I had become laid-back. Then, I would party all night, get home drunk on Sunday morning reeking of alcohol. But my daughter, Hope, would plead with me to take her to the Sunday School. It’s because of her faith and perseverance that I decided to go back to fight for my life!”

This time around, Sally sought to become a brand-new woman. She was faithful in attending Wednesdays, Fridays, and Sundays. Then, she wanted inner peace and in the course of a year, she received it. She was overjoyed that she had finally received the greatest gift on earth God in her.