“I was the mistress…”

Viviana became involved with many men during a phase of her life. In one of the relationships, she became pregnant with twins and decided to marry the children’s father, but, in the middle of her honeymoon, she lost the babies.

After seven years, her husband fell in love with another woman and the marriage ended. “I lost my ground. For me, I had been married for life,” says Viviana. “At that time, I went after the whys in spiritualism and they told me it was ‘karma’, because I had made men suffer and now I was paying for it. I accepted that and nothing worked out in love.”

She experienced several frustrations: “I tried more than 20 relationships. All of them ended. Then came the depression. Psychoanalysts wanted me to treat myself with medication, but I didn’t accept. Later, I found out that my pain was in the soul.”

When she was at rock bottom, Viviana knew about the Universal Church, but nothing changed. “I didn’t change my behavior. I was a tither, participated in purposes of faith, but I did not give up my life. Then I got involved with my martial arts teacher at the time and he swore he wanted something serious and that he was separated from his wife. He told me to wait a bit for him to make the separation official.” 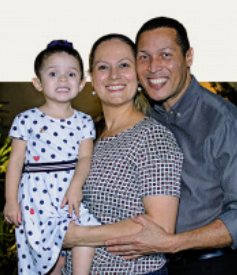 According to her, that never happened. After two years in this situation, Viviana realized the truth: “he lived with the two of them. I was a mistress, something I hated.” She reports that, at a meeting at the Universal, what the Pastor said at the Altar made her come to her senses: “You, who have a lover, must change your behavior if you really want to be with God.” And she reveals what she thought: “that sick passion couldn’t be bigger than everything.”

However, the surprises did not stop there: “His wife found out and called me. I was extremely embarrassed. It was another rock bottom. I was raised to have a family, children, with my parents as a great reference, but I became ‘the other woman.”

Viviana was professionally accomplished, but very frustrated in love. “I decided to give my life to the Lord Jesus. I was baptized. At the campaign of Israel, I said to God at the Altar: ‘Here is my life, which is rubbish, but I want the Lord that they say exists’.”

Her lover tried to continue the relationship, but she had made her decision: “It hurts, I liked him, my flesh wanted him and the need was enormous, but I was firm in my intentions at the Altar and in six months I was clean of it all. That’s when I received the Holy Spirit. Everything has changed. I couldn’t stop smiling.”

She says that she came to understand the Bible and the things of God. “Before, alone, I couldn’t do it. There is no longer a bruised heart, a soul full of pain, sorrow, and anxiety. With the Holy Spirit, I have courage, fearlessness, resourcefulness, and thirst to show God to people. I stopped being religious and I am truly with Him.”

“Only then could I have a family. I am

married to a man of God, of the same

Faith. We have a beautiful little girl. I am so

grateful to God for them and even more so

for His Spirit in me. I’m really happy.”