Home » The Addiction Started To Control Me…

The Addiction Started To Control Me…

"I couldn’t go a day without taking drugs..."

Marcelo is a 21-year old young man who witnessed his mother being beaten by his stepfather since he was a child. This made him grow up to be a rebellious teenager and it didn’t take long for him to find “relief”
in drugs. ‘The years passed and I was discovering what the world had to offer. At 13 years old I used the hookah, but with the help of friends I met and started using other drugs: cigarettes, alcohol, marijuana, and cocaine.”

He also got to know the world of rock, became the vocalist of a band, and built his style, with various piercings and tattoos. Thus, Marcelo became the center of attention, he was surrounded by friends, women, and an apparent joy, but his heart still felt alone and empty. ” I had everything, but I always wanted to be someone else.” 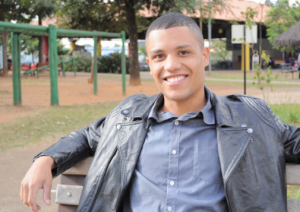 But the worst moment was yet to come. When he mixed several drugs, he overdosed.
“I couldn’t go a day without taking drugs and once, I ended up overdosing. At that moment I thought I was going to die.”

“In my mind I thought I was in control, but then the addiction started to control me in a way. I couldn’t go a day without taking drugs and, once, I ended up overdosing. At that moment I thought I was going to die.”

“God, I want to be different!”
When he went through this experience, Marcelo understands that he needed to take different attitudes. His mother always invited him to the Universal Church, and this time, he decided to accept it. “I arrived at the church on a Sunday and that I thought was the coolest thing. Nobody judged me because I have a different style. In prayer, I was very sincere and said to God that I liked to use drugs. But I wanted to stop and I asked for his help. I really wanted to be different.”

From that moment on, he received the strength to break away from bad friendships. Overcome his addiction and attend the deliverance meetings. It was not easy, but with the strength of faith, he achieved victory.

“The happiness I was looking for was only found when I am happy. I have a good relationship with my mother. Most importantly, I am certain of my Salvation.”