Bishop Macedo makes a special meeting at the Bandstand in Meier 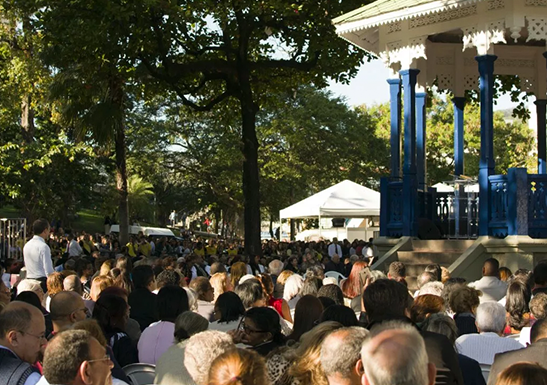 In the main public square, the silence and reverence were the same of those who attend the meetings at the Temple of Solomon in Brazil. More than six thousand people patiently waited for an event that already entered into the history of The Universal Church: a special meeting with Bishop Edir Macedo at the bandstand in Méier, 40 years after he made prayers there for the first time.

With bold steps, the bishop walked towards the place, greeting those who were there, recognizing/noticing people who are the “silver of the house,” that is, those who are in The Universal Church since its beginning. The joy of being there was noticeable in the bishop as in each participant that had in their face a broad smile.

Within the bandstand, the bishop thanked God for the privilege of being one of His chosen and to be able to take the light of the Word of faith to those who live in the shadow of the death. After this prayer, he recalled that in the past, that place had an unpleasant smell and was occupied by those most despised by society. He shared his memories with the thousands of people there of how it all began, remembering the hardships he faced and what he learned from that beginning, reassuring that it was exactly these hardships that collaborated for the light of God to manifest in his life and for The Universal Church to come about.

“I did not begin in this place moved by personal ambition; for more than eight years I’ve been wanting to serve God, but no one believed in me, no one, only my mother, my wife and, obviously, God Himself. In my time, in this place, the most unhappy people in life gathered here, and it was to this location that the Spirit of God brought us, and because there was a desire in helping people, this work multiplied. When we started, we used to come in a Volkswagen beetle. We began in the midst of a dirty place because that is how the Gospel of the Lord Jesus is. The Bible says that the people that were dwelling in darkness and the region of the shadow of death saw a great light. And the light becomes more evident when there is a greater darkness. The bigger the problem, the greater the light of God, the more evident God’s power is, so that we do not depend on our own strength,” he highlighted.

And he continued: “Today we are here in this bandstand, that seems more like a party bandstand, but I wished you had seen with your own eyes what happened 40 years ago in my time. We found here people who were dirty, filthy, smelling bad, people who were unwanted by others, but it was here in this desolate, difficult, dark and obscure place that the light of the Gospel shone and did what it did,” emphasized the bishop.

The Bishop pinpointed that those who truly have God’s Spirit are the ones that are concerned with those who are suffering more than with their own lives. “If you want to be this person used by God, from now on, do not think about yourself, but think of doing what God wants you to do: stretch out your hand to those who are desperate. More than ever, the need is multiplied due to the situation in which Brazil lives. In this cruel moment, we need courageous people that will be thinking about their neighbors,” he concluded.

To finalize the meeting, the bishop prayed for those who want to be used by God, and he prayed for God to bless all who were there at this memorable event.

The meeting lasted a little over 50 minutes, but surely it will be marked in the lives of those who participated as well as those who watched the live broadcasting on youtube, Univer, and in Brazilian television.

Tribute for its 40 years

This Friday (7/7), the Brazilian Postal Service launched a seal and stamp celebrating the 40 years of The Universal Church. The event took place in the auditorium of the Temple of Solomon in Sao Paulo, Brazil. It counted with the presence of the Sao Paulo’s governor, Geraldo Alckmin; the city mayor, Jõao Dória; the Minister of Science, Technology, Innovation and Communications, Gilberto Kassab; the president to the Brazilian Postal Service, Guilherme Campos; and other authorities.

Another tribute was given by Brazil’s National Congress, which hosted a ceremonial session on July 27th, celebrating the anniversary of the church and the benefits it has brought to the nation. More than 1,000 people attended.

The Universal Church of the Kingdom of God was founded by Bishop Macedo on July 9th of 1977.

The church has more than 10,014 locations worldwide, and it counts with the full-time support of 320 Bishops and 14,000 pastors who work around the clock to reach out to others with a word of faith and encouragement.

A 2016 research in Brazil revealed that yealy the church’s social programs in the country have reached out to more than 3.4 million people who are in need and marginalized by society. See some of the numbers of these social programs per year:

Click on this link to learn more about the 40 years of history of The Universal Church.

(Translated and adapted from text by Cinthia Meibach and Ivonete Soares)