Don’t argue with your children 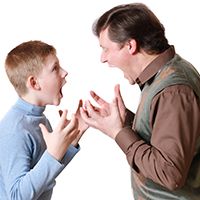 Recently, a mother in trouble contacted us with the following complaint:
“My six-year-old daughter is very rebellious. When I tell her to do something, no matter how simple the task is, or when she asks me for something, and I don’t give it to her, she makes a scene — she yells, cries, she says that I don’t love her… Then I get angry and start arguing with her.”

One thing parents need to know is that they shouldn’t argue with their small children. For instance, when this mother engages in an argument with her six-year-old daughter, she is lowering herself to the level of her child’s age — or raising her little daughter’s to the level of an adult.

A definition of a child is, “one who has not yet fully developed the capability to reason and judge.” How could one argue or debate with someone like that? What a child needs is to perceive the authority in their parents’ words.

When was the last time you argued with an authority? With a police officer, a doctor, or a judge? You simply accept their authority because you know it’ll be pointless to argue. You may even disagree with them and look for a way to appeal against their decision, but arguing on the spot will only make matters worse, and the authorities know about that. This is why they don’t lower themselves to the level of retaliating against those who reject and tease them.

In the same way, you who are a father or mother must discern and execute your role as an authority to your children. If your child must go to bed at nine, don’t argue about it. At best, give them one reason to make them understand (e.g. you have to be up early tomorrow morning to go to school) and then, just make sure to stick to what you’ve said: turn off the TV, take the video game away from him, turn the lights off, and that’s it! No arguing about it.

They will probably complain, cry, justify themselves, accuse you of being a bad mother, compare you to their classmate’s mother — but you shouldn’t engage in an argument. The moment a father or mother lowers their level to try and argue or convince their child to obey an order or a previously established rule, they lose their argument.

We don’t engage in an argument with a child. Be very clear about the rules, limit yourself to one brief explanation as to why they exist, and then just make sure you enforce them.

Your child won’t like it, but being a parent is not a popularity contest.