The Universal Church in Moldova 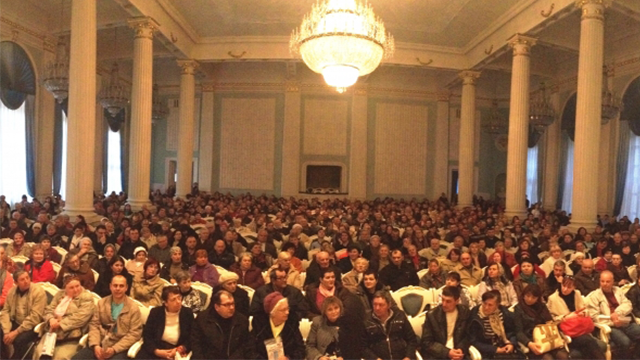 Moldova is a small Eastern European country, situated between Ukraine and Romania, with a population of a little over 3.5 million people. A great community of monks and nuns live within the 30 monasteries under the Moldovan Orthodox Church. According to the census of 2004, more than 90% of the population is Orthodox.

Currently, Moldova is among the poorest countries in Europe. According to the CIA, it faces issues of “widespread crime and underground economic activity.” In addition, the country is known among traffickers of persons as the “engine” of the sex trafficking industry in Europe. Between the years of 1991 and 2008, four hundred thousand women were trafficked in Moldova.

Against all odds, although coming from abroad, The Universal Church broke the barriers of religious prejudice and inaugurated its first church in Moldovan capital of Chișinău in 2011.

“In the beginning there is a certain level of resistance from the residents because of the beliefs of the country. However, when people begin to attend the services, they notice the positive results in their lives, and they see our sincere desire to help them. Soon after, the ‘walls’ fall down,” says Pastor Luciano Silva, who leads the work of The Universal Church in the country.

Prejudice is only one of the many battles faced by the pastors who receive the mission of spreading the Gospel in Moldova, especially if they are from other countries. “I arrived in Ukraine as a single pastor, without knowing how to speak a single word in Russian. The hardest part is not to leave Brazil, but to remain in the faith in a country that is so different; you ignore your own feelings. I learned a lot from the other pastors who dedicate themselves completely to the people who were in so much suffering, without taking into consideration the cold temperatures of -13 degrees or any other situation,” says Pastor Luciano, now married.

Today, The Universal Church is established in the country and it plays an important role in helping those who suffer with family problems caused by poverty and alcoholism. The volunteers of the church, who are mostly Ukrainian and Moldovan, carry out many social projects, including visits to orphanages, nursing homes and the collection and distribution of donations of clothing to these places. However, they prioritize and do not leave aside the spiritual help. “We always take a word of faith and motivation. We make special meetings for them.”

The life-transformation experienced by Kostia Lascu (in picture), 24, is a fruit of the teachings of how to make use of one’s faith. “I was a very complex person and my love life was destroyed. I turned to drugs and became very aggressive. I even made myself strong before my friends, but when I got home I collapsed.

Kostia did not know what to do, and that was when he found the last door. “I came to The Universal Church and gradually noticed a change. I quit drugs and today I have a life that’s completely transformed. I am prosperous and furthermore, I overcame sentimentally.

And you, what challenges have you faced to preach the Gospel? Be sure to share your opinion in the comments.