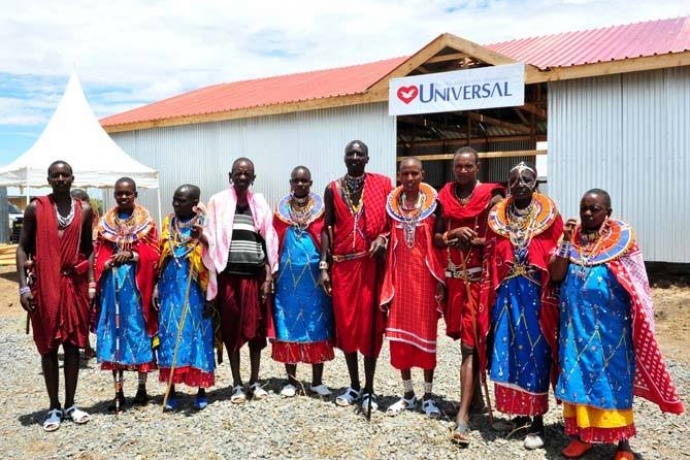 The Maasai tribe is one of the most famous African tribes. Known for preserving their customs through the ages, they cultivate crops and raise livestock in order to survive. There, the morans (warriors) work with a peculiar strategy that requires a lot of bravery in which they conquer the game of the lions for themselves. However, the Maasai are currently facing difficulties. A severe drought in the land has prevented them from using the techniques they know, and the lack of basic resources like food and water has left them in dire need. During the dry season, they eat only once a day.

In addition, hygienic conditions are precarious because they lack access to the appropriate products.  For example, they use branches to clean their teeth, and if they need more complex medical care, they go on a difficult journey to the nearest towns, such as Kajiado or Nairobi in Kenya.

Offering support to the Maasai

This is why The Universal Church in Africa makes effort to help this tribe. A little over one year ago, volunteers of the church made the first visit to the Kajiado region, where the Maasai villages are located. Since then, they have distributed donations of food and hygienic products every month, in addition to providing spiritual support. Bishop Marcelo Pires, who is responsible for the work of the church in South Africa, stays in contact with the tribe, and says that the next step is to bring doctors along with the volunteers in order to provide free medical assistance.

In an unprecedented act, the bishop was recently invited by the tribe to an acceptance ceremony. Normally, foreigners are not accepted as members, however the bishop was well received in midst of much celebration, and he was named “Saruni” which means “one who helps.”

Through this ceremony, The Universal Church gained free access to build a temple in the community.

On April 6th of 2015, the first Maasai church was inaugurated. The elders of the tribe were present and asked for everyone’s attention to the message that would be conveyed by Bishop Marcelo – unlike the norm, as members only obey the tribal chief.

In the beginning of the meeting, a prayer was held for those who were sick or felt pain. As they felt relieved from the pain, they expressed joy because they were feeling well. It was then that the bishop explained that the construction of the temple represented a refuge, a place to seek God’s presence when they are powerless, sad or facing problems.

The Maasai chief was happy with the construction and commented that it represents an opportunity for his people to know a true God.

The construction has not been completed because of torrential rains in the area, but soon it will be finalized. The inhabitants have received the volunteers with gratitude and have acknowledged the seriousness of the work of The Universal Church. Even one of the morans decided to live in the construction area during a period of two weeks in order to protect it.

“The Maasai people are known for their courage; they challenge even lions. However, they do not use this courage when facing everyday problems. Due to the great restrictions of the place in which they live, they surrender to the precarious conditions, the lack of resources, the traditions such as female circumcision, practiced until today, and The Universal Church arrives with the message of faith to change their conditions and save them.”

With the inauguration of the first temple of the Maasai tribe, the church completes another step in its goal of helping those who suffer around the world.